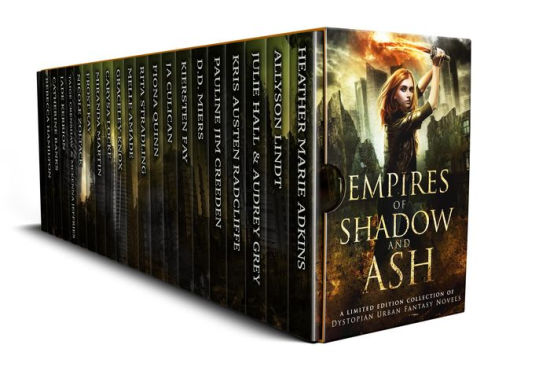 Fire and Ashes, a UF dystopia, will be released later this year in the  EMPIRES OF SHADOW AND ASH boxed set!

Isadora opened her mouth to ask when a hand grabbed the back of her head and wrenched her neck to the side. She stumbled, ducking her head to make her neck smaller, and jerked up and back with the Lucerne hammer. The weapon lodged into the vampire, and she turned around. It only struck his shoulder, though, and as she yanked it free, the vampire was reaching out to snap it.

The man stabbed the vampire with his dagger. The vampire twitched and fell straight toward Isadora. The man yanked on her broken arm, and she nearly slammed the hammer into him.

She could not see the vampires, but a wild billowing dirt color was heading straight for them.

Isadora whirled around. Her broken arm flew around, and she wasted precious few seconds to tuck her hand inside her pants waistband. Now, she could somewhat run.

“You weren’t kidding,” the man muttered. She could hardly hear his words. “The wastelands will kill us.”

“I’d rather that than the vampires.”

She glanced over at him and spied the growing stains on his clothes. He had been injured too, perhaps bitten. He wasn’t running faster than she was. They were fairly keeping pace, which did not spell well for them.