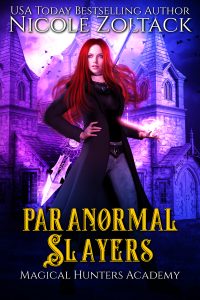 Orphan Mirella is more than a little distracted when her second year at the Magical Hunters Academy starts.

Mirella isn’t boy crazy. Since coming to the academy, she’s bound and determined to research, study, and practice as much as she can. She will become a strong witch no matter the toll it takes on her mentally, physically, and emotionally.

But ever since she learned her parents had been murdered, Mirella’s been shaken to the core. Researching about them, delving into their past, trying to resurrect the cold case causes her to fall behind on her studies to the point of being threatened with expulsion.

But Mirella can’t stop, and while she may or may not be getting closer to find her parent’s murderer, whichever paranormal creature it had been, she just might have caught the eye of someone else, someone evil with the power to vanquish not just her but the entire academy as well.