Not on Her Watch 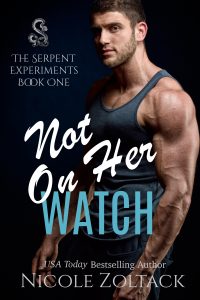 Marine Nathaniel Strongarm is more than ready to take on the terrorist group, the Hidden Serpents, on their island Grotto’s Bay. Being captured along with other marines sure wasn’t the plan. Behind enemy’s line is worse than terrible.

Green Beret Shauna West is devastated to hear that her fiancé was captured. On the team for his Search and Rescue, she’s eager to do her part and save him. Too bad there’s a vicious murderer slaying civilians, a killing machine for the Hidden Serpents. Even worse, that killing machine is a brainwashed Nathaniel.

Will Shauna fully rescue her love? Have the other marines been brainwashed too? When night comes, who will still be standing?