A Matter of Doubt 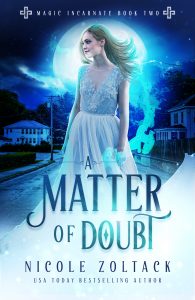 It’s not every day you get a second chance to live.

The world is different now. Everyone believes Crystal is dead. Her adopted mother is married, and her boyfriend Vince has turned to her best friend Brianna.

Gavin, the hot witch with a witch hunter for a father and the only one who knows Crystal is alive, insists she can’t return home. After all, she has new enemies. Worse, she’s no longer magic incarnate.

Yes, Crystal’s back, but she’s not the same. She’s human.