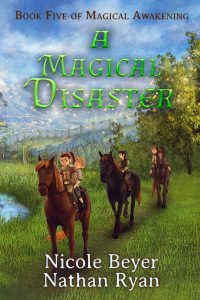 Gavin, Millie, Ethan, and Rafe barely have time to celebrate when they’re plunged into yet another magical disaster.

Rafe’s magical coma has ended, but his visions have not. Now, he’s seeing signs of a coming war with the Grand Kingdom. Worse, Queen Tatiana Diurant wants them dead.

Will the kids be able to convince their king to aid them? Will their allies stand with them? Can they dare to hope to survive in this new magical world? Or will war return to the land as it had during the Age of Magic?