A Balance of Power 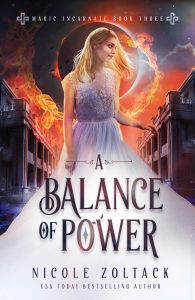 It’s not every day you accidentally open a portal to Hell on earth.

A witch died to bring Crystal Wynter into the world as the embodiment of magic in the teenager’s first life. Now, that witch is back with a vengeance.

Unfortunately, Crystal’s attempts to free herself from the witch’s clutches have disastrous consequences. Demons are hell-bent on destroying her hometown Claymore.

Throughout her second life, Crystal has lacked magic except for the ability to shift into a creature and a strange connection to both life and death. If she can’t find a way to balance her new powers, the apocalypse will happen this time.

Magic has never been more vital.