The Flames of Death 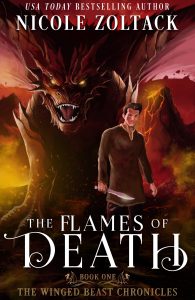 In a world where dragons rule the skies, the land, and the sea, human struggle to survive.

Seventeen-year-old Tarek is not one to stand back, not after he watches a dragon eat the girl he adores for right in front of him. When he fights back, he learns a terrible secret about himself that might change everything.

Because Tarek isn’t just human. And if he has his way, the dragon overlords will begin to feel fear themselves.