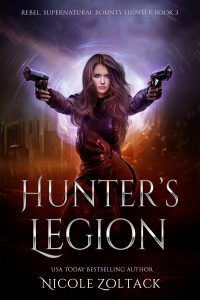 Rebel has had her revenge… Or has she?

The ones responsible for killing Rebel’s brother are dead but not before unleashing a terrible evil on the world.

It’s up to Rebel to vanquish that evil.

But she won’t be able to do it alone. She’ll need a legion.

Too bad she’s made far more enemies than allies…