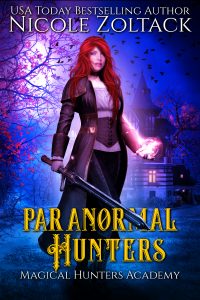 An untrained witch. An orphan. A teenager looking for her place in the world that’s a lot larger than she ever realized…

Sixteen-year-old Mirella’s life changes forever when a werewolf sniffs her out one night. Turns out that all the weird incidents that happened over the years when Mirella got upset or angry is actually because she has magic. She’s a witch, and she’s been recruited for the Magical Hunters Academy.

There’s no way she’ll ever turn that down, but then she learns that the school literally trains all sorts of magical beings to be hunters. No surprise there, but there are good paranormal creatures and evil ones.

Ones who need to be hunted.

Some who need to be slayed.

When Mirella’s one human friend, a fellow orphan, and the orphanage is targeted by one of the evil paranormal creatures, Mirella is willing to do whatever it takes to hunt that bastard, but is she strong enough to handle this mission?