The Maelstrom of Death 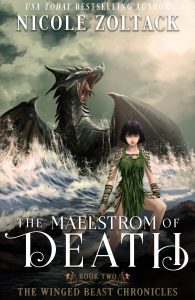 Drowning is preferable to being a sea dragon’s slave.

For over a decade, seventeen-year-old Adelaide has known she is both slave and sea dragon. She hasn’t been willing to fight back.

But her goal isn’t just death to every sea dragon. Now. Adelaide wants war between the three dragon species—sea, fire, and ice.

Her scheming may just cost her everything, including her friends’ lives.

Including her own life.