Excerpt for A Time of Turmoil

To celebrate only three more days (almost two!) until release, here’s an excerpt from A Time of Turmoil featuring the three characters on the cover! 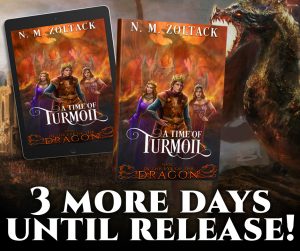 Noll was fiddling with the sleeves, and Vivian coughed slightly in his direction.

“Stop,” she whispered out of the corner of her mouth.
“We are about to begin.”

“Begin what?” he asked simply.

She sighed. Five times already, she had to explain this to him. He hated to wear his surcoat and continually fussed about wearing it. His memory was terrible. When she had been younger, she thought he repeated questions to annoy her. Oh, no. That was simply Noll. A year older than her at fifteen but he acted like a child yet. She did love him as much as she could, but this was not the time to be anything but proper. A man was about to be killed for crimes against their family and all the land of Tenoch Proper.

If one dared to mention the Li family, they must be killed. It was as simple as that, a crime punishable by death to ensure that peace and harmony lasted throughout the Rivera reign, long let that be.

“Stand still. Pretend you are a sentinel. Can you do that?” Vivian asked Noll.

He clicked the heels of his shiny black boots together and stared straight ahead, arms out.

“Put your arms at your side!”

“What is he doing?” Rosalynne demanded.

She sighed. “I didn’t say to be a tree. A sentinel. A guard. Pretend you’re a guard at attention. Stand tall, like that, but with your arms—”

“Do I get a sword then?” he asked eagerly.

Vivian blinked a few times in dismay. She hadn’t thought it wise for him to be here, to witness this. Last time, he had nightmares for weeks. Did anyone ask her opinion of the matter? Certainly not but well they should. She would make a fine, grand queen someday.

If only she had been first and not last.

Tags:  A Time of Turmoil, In the Eye of the Dragon, N. M. Zoltack