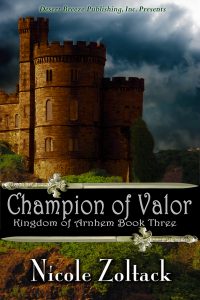 The war between Specia and Arnhem now reaches the sea after the selkies discover the Mystical Conch Shell of the Sea has been stolen. Selliki the selkie sets out to find it, and Gabrael, the mage she loves. No union between a selkie and a human has ever had a happy ending, but neither can ignore their feelings. Each night, they experience terrible, real dreams that show how doomed their love is.

The war threatens not only their love but the entire world. Lucifer has aligned himself with Specia and wants nothing less than to bring about the Apocalypse before its time. In the last battle, trolls fight icthyocentaurs, dwarves armed up against the Drow, angels against demons. Only one kingdom will prevail; that is, if the world doesn’t end.