Cover Reveal: Holly and Hopeful Hearts by the Bluestocking Belles and a Bonus Excerpt 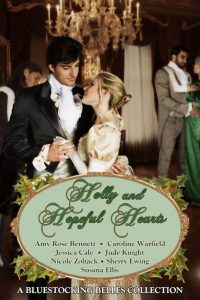 ABOUT HOLLY AND HOPEFUL HEARTS

When the Duchess of Haverford sends out invitations to a Yuletide house party and a New Year’s Eve ball at her country estate, Hollystone Hall, those who respond know that Her Grace intends to raise money for her favorite cause and promote whatever marriages she can. Eight assorted heroes and heroines set out with their pocketbooks firmly clutched and hearts in protective custody. Or are they?

A Suitable Husband, by Jude Knight

As the Duchess of Haverford’s companion, Cedrica Grenford is not treated as a poor relation and is encouraged to mingle with Her Grace’s guests. Surely she can find a suitable husband amongst the gentlemen gathered for the duchess’s house party. Above stairs or possibly below.

Facing a dim future as a spinster under her mother’s thumb, Vanessa Sedgely makes a practical decision to attach an amiable gentleman who will not try to rule her life.

A Kiss for Charity, by Sherry Ewing

Young widow Grace, Lady de Courtenay, has no idea how a close encounter with a rake at a masquerade ball would make her yearn for love again. Can she learn to forgive Lord Nicholas Lacey and set aside their differences to let love into her heart?

Actress Charlotte Halfpenny is in trouble. Pregnant, abandoned by her lover, and out of a job, Charlotte faces eviction two weeks before Christmas. When the reclusive Earl of Somerton makes her an outrageous offer, she has no choice but to accept. Could he be the man of her dreams, or is the nightmare just beginning?

The Bluestocking and the Barbarian, by Jude Knight

James must marry to please his grandfather, the duke, and to win social acceptance for himself and his father’s other foreign-born children. But only Lady Sophia Belvoir makes his heart sing, and to win her he must invite himself to spend Christmas at the home of his father’s greatest enemy.

Louisa Wycliff, Dowager Countess of Exeter wants only for her darling daughter, Anna, to find a man she can love and marry. Appallingly, Anna has her sights on a scoundrel of a duke who chases after every skirt he sees. Anna truly thinks the dashing duke cares for her, but her mother has her doubts.

An Open Heart, by Caroline Warfield

Esther Baumann longs for a loving husband who will help her create a home where they will teach their children to value the traditions of their people, but she wants a man who is also open to new ideas and happy to make friends outside their narrow circle. Is it so unreasonable to ask for toe curling passion as well?

Dashing Through the Snow, by Amy Rose Bennett

Headstrong bluestocking, Miss Kate Woodville, never thought her Christmas would be spent racing across England with a viscount hell-bent on vengeance. She certainly never expected to find love…

Jasper did his best to not scowl. “I think that those who would lie to sell papers should be hanged.”

Her eyes widened, and she took a step back on the rock.

He held out his hand to help her down. “I do not care for the likes of The Teatime Tattler especially. It grates me that—”

“Have you read Aunt Augusta’s column? She gives ladies and gentlemen hope and advice about love and more. I, myself, find it a kind read. Surely even you can find no fault with it.”

He scoffed. “Every week, Aunt Augusta repeats herself. ‘Love will find a way.’ ‘Love is worth the wait.’ She oversimplifies love.”

“So you think love is complicated?”

Belatedly, he realized their hands were still clasped, and he released his hold on her. “Matters of the heart are complicated, trying…very difficult.”

He couldn’t tell her, wouldn’t, but for a brief moment, he did consider it. Why bother? It was trying to move on as it was, and he was having difficulty doing so. Talking about it would not help, and of all people, why should he tell her?

For once, though, conversation with her did not feel forced or awkward.
A sudden gust of wind blew a few papers from Lady Anna’s hand. Laughing, they chased each one down, and when they captured them all, Jasper held out a hand to secure them for her. They stood far too close together—their chaperone seemed to be missing—and he stared down at her. He couldn’t understand why she hid herself away from gatherings, like he did. If she went to all the balls and gatherings, she would be betrothed herself. She was a fine, beautiful lady…